Poplin is a fabric weave, so a cotton poplin shirt is a cotton shirt with a poplin weave. When people refer to poplin shirts, they usually aren’t referring to a type of material. Instead they are talking about the kind of weave in the shirt. Typically, poplin shirts are made from cotton or cotton and polyester. Tabinet is another word for poplin. The retailers below offer poplin shirts.

What is a poplin weave?

The typical style for a poplin weave is one where the weft and warp fibres go over and then one under, as shown in the black and white pattern image below. 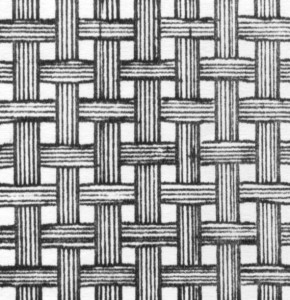 Confusion over the term poplin often occurs because the meaning of the word poplin has changed over time. Today, the word generally refers to the weave, as described above. However, in the past the word poplin was used to describe a type of material which where the warp weave was silk and the weft weave was wool. In the Louisa May Alcott book Little Women there are references to the term poplin. In the book the term is used to denote a type of fabric, rather than a weave: “When the evening for the small party came, she found that the poplin wouldn’t do at all, for the other girls were putting on thin dresses and making themselves very fine indeed.”

Poplin weaves tend to be lighter than other weaves and therefore more appropriate for warmer weather. However, I find that they crease more easily than twill shirts, so twill shirts are probably better for traveling.

What is a poplin shirt with a broadcloth weave?

A poplin broadcloth weave uses finer yarns and the yarn is woven very tightly, giving the shirt a slight sheen.

Can’t find what you’re looking for? Try the Wardrobe Essentialist search engine to find a shirt that fits you.